Is it possible to lose fat and gain muscle or am I “spinning my wheels”?

Many people regularly ask the question, is it possible to lose fat and gain muscle? Depending on who you ask, some will clearly state it is impossible, while others claim it is the single best way to improve body composition.

What is often lacking in many cases, however, is context. Which population are we referring to? Is the individual trained, untrained, overweight or coming back from a layoff or injury?

Body recomposition (i.e. simultaneous loss of fat and gain in lean mass), is often touted as the ´holy grail´ of dieting. This makes sense – who wouldn´t want to gain muscle mass whilst also getting leaner? The practical implications of doing so, however, are not as straightforward, and a number of caveats need to be highlighted before we delve into the literature.

In order for body fat loss to occur, an energy imbalance needs to be in place; this can be achieved via calorie restriction through the diet, an increase in energy expenditure, or a combination of both.

A fear among many dieters is the risk of losing muscle mass while adhering to a prolonged caloric deficit. This has been reported in numerous dieting studies with some individuals losing up to 20-30% of lean body tissue (including muscle mass).

This is of major concern for a large portion of the population who wish to lose body fat and/or improve body composition. The retention of muscle mass is fundamental for many performance athletes, ranging from the recreationally active to the elite, who are looking to perform optimally.

Similarly, for elderly individuals, slowing the rate of decline, reversing, or even increasing muscle mass and strength, should also become a priority. Especially for those who wish to improve their body composition, maintain mobility and continue to live a full and healthful life.

Although loss of lean body mass has been reported in the scientific literature (see hyperlink above), there is strong evidence to suggest that this can be prevented from occurring, even within an aggressive calorie deficit.

The two major strategies that can be utilised to offset any potential loss in muscle mass during a calorie deficit are, firstly, consumption of adequate protein (at least 1.2g/kg/day) and, secondly, to do this in conjunction with a well-designed resistance training program. Resistance training can attenuate loss in muscle tissue by stimulating muscle protein synthesis, while adequate protein consumption plays a role in augmenting the muscle protein synthetic response to training. Both training and protein feedings work synergistically to increase the muscle synthesis response, helping to shift towards a positive net protein balance. 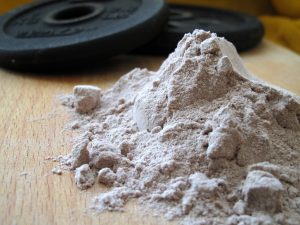 As mentioned, adequate protein intake and a well-structured resistance training program have been repeatedly shown in the literature to attenuate loss in muscle tissue. In some cases, these valuable tools can even increase muscle mass during a caloric deficit. So yes, to answer the original question, it is possible to gain muscle while losing body fat!

Realistically, unless an individual is super lean (single digit BF male, < 15% BF female), or dieting for a bodybuilding contest, a substantial loss of muscle tissue is not as common as some will have you believe, once the correct tools are in place.

What does the research say?

A classic example to illustrate the effects of body recomposition has been reported in a study published early last year. The study compared two different protein intakes, 1.2g/kg/day (1.5 x RDA) vs. 2.4g/kg/day (3 x RDA) in overweight males, during an intensive four-week intervention.

Subjects were instructed to follow a 40% reduction in their habitual calorie intake (definitely an aggressive diet!).

In addition to the aggressive dieting conditions, subjects also participated in a rigorous training regimen (which included resistance exercise and interval training). Participants exercised for six days a week throughout the study and were also advised to do 10,000 steps a day (incidentally a great idea for anyone interested in their health and well-being, especially those with a sedentary job/ lifestyle).

Results showed a similar decrease in body weight (~3.5 kg), with no differences in the amount lost between the two groups. However, what was most interesting were the results regarding lean body mass. Lean body mass (including muscle) remained unchanged in the group consuming the lower protein intake, whilst the higher protein group gained ~1.2 kg lean body mass.

What this essentially means is that the control group lost ~3.5kg of body fat, and the higher protein group lost ~4.8kg of body fat during the four-week period. Results are shown in the graph below where FM = fat mass, LBM = lean body mass and * illustrates a significant difference. 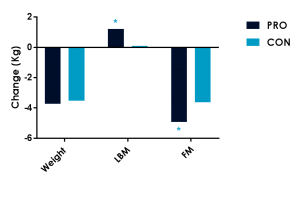 This study is encouraging as it shows overweight males CAN lose body fat and gain muscle throughout a four-week intensive exercise period. The one caveat which must be pointed out is that the participants were coming back to training following an off-season. Therefore, the possibility of muscle memory is a major confounder. Note – participants had a 1 repetition max bench press of 100kg, as per the pre-intervention strength assessment.

We know that when untrained individuals begin training, they tend to make gains in both strength and muscle mass at a faster rate compared to advanced trainees. Moreover, body recomposition can occur to a more pronounced degree in beginners with more fat to lose and more muscle to gain.

It has been reported by the authors of the study described above that the participants regularly complained about hunger, on top of the difficulty involved in adhering to the very intensive training program. Nonetheless, if you as an individual are coming back to training following a layoff and have the motivational capacity and adherence to undergo such a feat, this may be a suitable option in order to achieve the ‘holy grail’ of dieting (simultaneous loss of body fat and gain in muscle mass).

Prior to the previously mentioned study, the same research lab carried out a four-month study in overweight and obese pre-menopausal women.

It could be argued that the superior results of the slow group may have been due to the longer period spent completing the study (~9 weeks compared to ~5 weeks), and thus a longer period spent doing supervised resistance-training sessions. Also, and perhaps more importantly, body fat levels of the subjects were not particularly low in this slow rate group (17 and 27%, for men and women, respectively).

There is also the possibility that the muscle gain experienced by subjects in this study was due to the novel stimulus of a well-designed resistance training program. Increases in muscle mass occurred predominantly in muscle groups of the athletes that were not well trained. Therefore, this may not be a realistic option for athletes involved in strength and power-based sports that incorporate full body resistance training programs.

It is worth pointing out that the subjects achieving body recomposition throughout the aforementioned studies appear to fall under one of the following criteria: 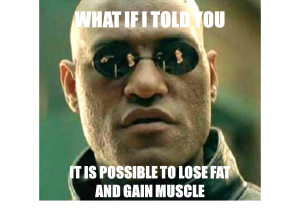 Therefore, the results of the studies highlighted may not be extrapolated to lean, resistance-trained individuals. That is not to say that it does not occur to individuals outside of these criteria, but the magnitude of the results would not be comparable to what is observed in less trained, overweight individuals.

The optimal protein intake to facilitate fat loss while retaining and/or increasing muscle mass has yet to be determined and is likely dependent on numerous factors, some of which have been highlighted above.

Super high protein intakes greater than >4g/kg/day have also been shown to result in favourable body composition in resistance-trained individuals. Although a simultaneous gain in lean body mass (a fraction of which is contractile muscle) and loss of body fat, 1.9kg and 0.2kg, respectively, has been reported during an eight-week study, it must be highlighted that although resistance trained, subjects were not very lean, with baseline measurements averaging 16% BF in both men and women.

As discussed in the article “How much protein do I need to help me reach my goal(s)”, protein intakes should be individualised based on a number of factors, namely goals, lean body mass, age, and training demands. Intakes between 1.8-2.4g/kg/day, however, appear to be a sweet spot for many.

It is also worth bearing in mind that even in the studies that show maintenance of lean body mass during hypocaloric conditions (caloric deficit), one has to remember that these results are presented as a mean, and thus considerations regarding inter-individual variance may apply. For example, there will have been some participants who gained muscle and others who will have lost muscle mass during the same dietary and training protocols. It is also important to be aware of the limitations in assessing body composition, and when interpreting results between studies using different body composition measurement methods.

The question remains, for those who regularly train, and are relatively lean, is it possible to gain muscle and simultaneously lose body fat? Perhaps, yes. Is it optimal, however, to persistently chase the dream of body recomposition? Or, would a better approach involve structuring a designated period to gaining muscle mass, and allowing a separate time point to concentrate on dieting? Most experts within the field would recommend the latter.

In terms of it being optimal, it may be best for those currently involved in resistance exercise training to concentrate on one or the other (that is, a maintenance/gaining phase or a dieting/cutting phase), for an extended period, to reach one’s goals in order to maximise muscle gain, and fat loss potential.

Part of the rationale behind a perodised nutritional approach for optimal body composition is based on the fact that the muscle protein synthesis (MPS) response can be reduced after only 3 days during a caloric deficit. Therefore, to optimise creation of new muscle proteins, it is advisable to eat at maintenance calories or above. Hypocaloric conditions may also negatively affect training quality – the latter is the most significant stimulus in increasing lean muscle tissue.

To sum up, body recomposition by simultaneous weight loss and increasing lean body mass, although possible, may not be the best strategy to use when looking to improve body composition, unless you fall into one of categories described above. For everyone else, it may be prudent to adopt a direct approach to reap the benefits of either a focused time period gaining muscle or a separate phase losing body fat.

As always, this decision should ultimately be in line with personal preference, based on an individual´s goals and objectives.

If you would like a bit more detail and nuance regarding the underlying physiology involved in body recomposition, check out Lyle McDonald´s article – “Adding muscle while losing fat”. He has been writing about exercise physiology, training and nutrition for decades and his site provides a wealth of great quality, evidence-based, scientific information.

If you have enjoyed this article, please feel free to share it on Facebook by clicking here.